Why Every Cook Should Own an Instapot

If you’re a Foodie than you know about the new, Instapot kitchen appliance. It wasn’t too long ago that a utensil like the Instapot would be relegated to the kitchens of the pros, but this pressure cooker has moved from behind the restaurant line and into the kitchens of homemakers all around the globe. What hasn’t happened in decades is happening now; Instapot is a hit and it is transforming the way many Americans are cooking.

Under Pressure: Food that Should Take Hours to Cook Now Takes Minutes

A pressure cooker, which the Instapot is, is the perfect, all-in-one kitchen tool for homes who have a lot to do as soon as they get home from work. Where once there would be a wife or husband who is at home preparing the meals and the house for a good lifestyle, now has more time to get what needs to be done, done. A pressure cooker like the Instapot takes the time it would take to cook a large meal and shrinks it down to almost half the time, sometimes even less. So, we know that the Instapot is a great device for cooking at home, let’s see what people are cooking in it and how it is creating more time for family time rather than cooking time.

The Instapot brand of pressure cookers really took off during the holiday season of 2016. It vent viral on social media and the company that makes the Instapot became instantly burdened by the high demand of their product. When we bought one for Christmas, it arrived with a dent in the outer casing. After researching the products, because we bought before we did, it came to light that due to the high demand of their products, some units were released with this type of slight damage. The company worked quickly to replace any damaged units and for the most part, the units worked well with or without the slight damage. Once you get your hands on an Instapot and are ready to do some pressure cooking, you’ll need to know what you want to cook prior to getting ready to pressure cook your foods.


What an Instapot Can Do | It Can Cook Everything.

When you first get your Instapot you might be thinking, “What am I going to do with this?” You may have never pressure cooked before, but it’s time you did because once you’re comfortable cooking with an Instapot, you may never go back to your stove or oven again. Here’s my short list of things I cook inside my Instapot. By no means is this a definitive list. I want you to have an idea how quick and easy it is to cook complete meals in one pressure and all at the same time. 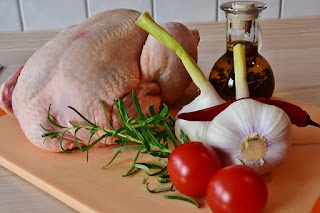 That’s my short list for now. I will be adding recipes in the future, so be sure to check back for more on my experience with the wonderful Instapot pressure cooker.

Posted by Francis Damian Walsh at 7:07 AM No comments:

Eating Your Way Through Houston

Get Ready to Eat Your Way Through Houston Texas

Houston is a diverse city with cultural neighborhoods that combine to make Houston the 4th largest city in the United States behind New York, Los Angeles, and Chicago. When you think about the top three cities, you cannot avoid speaking about the cultural foods found among each city's inhabitants. It's for this same reason that Houston is on the leading edge of food and entertainment. For a City with a population over 4-million, Houston is one of the most diversified dining industry in the US. Below you will find some of the best Foodie Feasts to be had in Houston.

Eating Your Way Through Chinatown in the Bellaire Area of Houston

Houston Foodies can find a complete food court and market featuring many delicacies from Hong Kong. Houston's Chinatown is rich in history and the neighborhoods that surround Chinatown are filled with hardworking people who take their food seriously. Besides Chinese fare you will find Vietnamese food as well. A particularly delicious dish is the Vietnamese Cajun crawfish which is a featured dish a Crawfish and Noodles. You will find your source of Dim Sum from HK Dim Sum also located in the Chinatown area of Houston.

Eating Your Way Through West Houston, Katy area of Houston

Visiting the westside of Houston brings you close to a well known dining facility and cultural center, the Phoenicia. Inside you will find thousands of local fare. Baklava, Tabouli, Thai cuisine, cabrito (goat) cooked over an open pit, a huge Korean superstore and more. All these outlets are designed around food; both cooked and raw. A trip to the west side of Houston may bring you back home a few pounds heavier after visiting one of Houston's most Foodie spots.

Eating Your Way Through Midtown Houston

Houston's central business district has plenty of workers to feed and plenty of choices for workers to choose from. Midtown Houston began to grow bigger at the turn of the 20th century and for 100 years it has build itself up into a tightly packed and committed neighborhood. The intersections of Alabama with Main Street is where should begin to venture out to the four corners of Midtown. You'll find the Continental Club, Breakfast Klub, and Double Trouble Caffeine & Cocktails are all just around the corner from you.

Eating Your Way Through Eastside

Mexican food is best when prepared by an experienced chef of Mexican delicacies. In this part of town you will find Ninfa's, probably the best Mexican in the United States, operating alongside, Moon Tower Inn, El Tiempo Cantina, and Voodoo Queen. Even though Mexican food reigns supreme on the east side, you can find contemporary foods at restaurants that do not feature Mexican food.

Houston's Original center, the Market Square Historic District contains such eateries as La Carafe, the oldest bar in Houston, OKRA Charity Saloon, The Pastry War, El Big Bad, Bovine & Barley, Treebeard's, Moonshiners, and Hearsy Gastro Lounge. As you can see, the diversity is vast. From new-age cuisine to historically delicious Mexican Foods, The Historic, Market Square of Houston has the foods to satisfy a Foodie's appetite.

Eating Your Way Through the Heights of Houston

Heading to the Heights of Houston is like visiting a living museum. Being one of the oldest and most developed area of Houston, here you'll find foods, coffee, meats, fowl, desserts, entertainment and more. Boomtown Coffee, Cedar Creek, Coltivare, Down House, and Hugs & Donuts all have facilities in the Heights of Houston. Choosing which one to visit is up to you, but you'll be happy to know that all these choices have been made because they deserve the recognition of being one of the best Foodie spots in Houston. Posted by Francis Damian Walsh at 8:01 AM No comments:

The End of Summer Begins the Holiday Season

A Summer of Expectation

Many see the end of summer as the end of the good life; vacations have been had, delicacies have been consumed and it seems like life is getting back to normal. The truth of the matter is though, the end of summer is the beginning of the holiday season! as soon as you get your kids back into school, you have to begin planning for the up coming festivities that occur all throughout the end of each year.

What's Next on the Party Planning Schedule

The first sign of the end of summer is Labor Day. This day is for recognizing the hard labor of the American worker. It's a great time to bring the ones you love together for a end of summer party. It may be the last of the season. Fall and winter begin shortly after Labor Day in some of the northern states. Implementing a party plan starts with when the event is planned for and it ends when the last guest leaves or you finally lay your head on your pillow after a long day of entertaining. Getting passed Labor Day puts you on a collision course with the first end of year holiday, Halloween.

Octoberfest: Parties in the Fall Lead to Celebrations in the Winter

October brings us the fine celebration of Oktoberfest and the German goods that go along with the celebration. Special costumes, hats, foods, and smoking can be the centerpiece of any successful German Fest. Bring a big appetite and thirst to any Oktoberfest you plan on attending or planning. Don't forget at the end of the month is Halloween and it is quickly becoming one of the most liked holidays of the year. Some see the costumes and candy travels as a nod to the pagans of religious past, but what we see is an American tradition every youngster should be able to enjoy.

Get your candy and spooky lights ready for Halloween this year. Don't forget to purchase a Halloween costume from one of many great, discounted costume shops and feel like the character you always wanted to be this Halloween.

Give Thanks for Thanksgiving

A traditional Thanksgiving meal includes not only the foods but the people. Family should gather around a well decorated and food-filled plateau of dinner. Let the games play, bring the children in and give them a place to eat their meal with the other kids. Allow the adults to commiserate and enjoy a well planned and prepared dinner. No matter what you eat, it's because of the thanks we are giving that people join together on this great, American Holiday. Special foods can be delivered directly to your home. Easily prepared or prepared for service, New online outlets are offering households like yours a way to get the most out of your Thanksgiving without having to work too hard to enjoy it.

Christmas is the best Holiday. Mostly because we receive gifts from our loved ones and our lives are enriched by them. Thoughtful gifts include a nod to the recipients nature; what do they enjoy? Holiday gift giving begins with holiday gift shopping. Online shopping has risen 500% over where it was just a few years ago. Now, more and more holiday shopping is happening away from holiday sales and in fact, away from holiday stores. Consumers are looking for cheap and easy holiday sales for gifts, costumes, and food. Even though it's still summer, a smart shopper is prepared ahead of time for any great, upcoming party or holiday event. Posted by Francis Damian Walsh at 8:17 AM No comments: Labels: Christmas, Halloween, labor day, partyplanning, summer,
Posted by Francis Damian Walsh at 11:02 AM No comments:

"Parties that people remember evoke a feeling of warmth and happiness." F. Walsh

YES! That warm fuzzy feeling is what we want for you.

Read about what makes or breaks a great party hosted by wonderful people who want to get the best memories of a special moment in time. Let us help you Party & Plan your next event!

All You Can Eat!